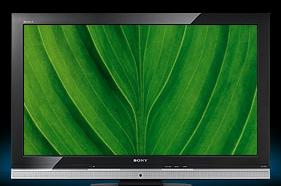 I showed up for Sony’s Press Conference the day before CES, and it basically consisted of a high-level Sony-exec saying: “We are awesome, yes we are! Our new products are just going to prove our level of awesomeness!”

Still, they had some terrific products to show, including the VAIO P Series netbooks, they also had several televisions on display, including the Sony Bravia VE5 Series. These televisions are an upgrade of the V-Series models, and they have Full HD 1080p resolution and Motion flow 120Hz technology.

One notable feature is the energy-saving Presence Sensor that will automatically power down the picture if its motion and light sensors do not sense people in the room. It won’t stay that way, as the picture will go back to normal when the user re-enters the room.

The VE5 also has a Hot Cathode Fluorescent Lamp (HCFL) to reduce energy consumption by forty percent. There is yet another energy-saving feature that cuts the flow of energy to the television by turning off all of the components when the television is turned off.

You should be able to purchase the VE-5 series of televisions this Spring or Summer in 40, 46, and 52 inch models. Unfortunately, the company hasn’t given a price as yet.