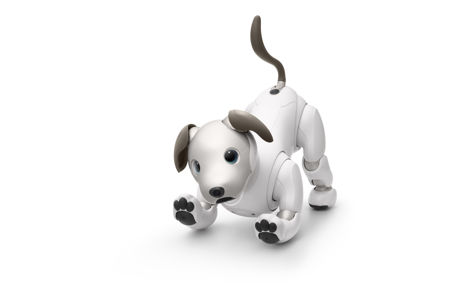 Remember Sony’s Aibo when it was first introduced close to a couple of decades ago? Now that was certainly a novelty in terms of consumer electronics, and the world of toys has since evolved to such an extent that a robot dog is no longer any kind of wonder inducing moment upon its unveiling. Still, this has not stopped Sony from showing off their special First Litter Edition of its acclaimed Aibo autonomous robotic “puppy” companion in the US, not too far down the road after the reintroduction of Aibo in Japan recently.

The First Litter Edition of Aibo will come with the Aibo, of course, in addition to a three-year AI Cloud Plan as well as a collection of Aibo toys, in addition to an individually numbered commemorative dog tag. It is interesting to note that there are no two Aibo companion robots that are the same, as depending on the individual owner’s approach when it comes to raising their Aibo, those actions will shape its personality, behavior and knowledge. Not only that, the Aibo can learn new tricks via owners’ interactions, in addition to its experiences with changing seasons and different events.

It will not be passive, but rather, will actively seek out its owners and make full use of its facial recognition technology in order to recognize their faces. Apart from that, it is also able to detect words of praise and smiles, while react to being petted or scratched on the head. Ultra-compact 1- and 2-axis actuators ensures that the Aibo’s body has adequate freedom of movement, up to 22 axes. Deep learning AI technology paves the way for adaptive behavior, while it expresses itself via a combination of eye, ear, and tail movements, as well as different voice sounds. Got to love the two OLED displays that represent its eyes, providing the appearance of blinking and closing.

The Aibo First Litter Edition with accessory bundle and three-year AI Cloud Plan will come with an asking price of $2,899, which is one of the more expensive Christmas toys you can procure this year.