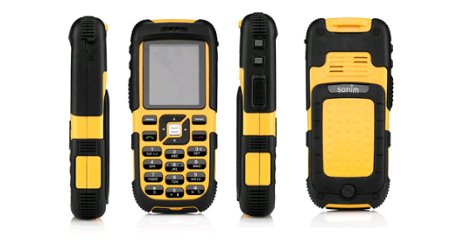 Mention Sonim and what comes to your mind? Chances are those who are more well versed in the world of cellphones would be able to relate that brand name to a handset which is well known for its ruggedness. Well, Mobile World Congress 2010 in Barcelona, Spain, was the platform where Sonim decided to announce the availability of their brand new XP2 Spirit which will hit Europe. This rugged 3G-capable cellphone might be rugged, but at least it sports a pretty face to debunk myths that everything tough and rugged will need to compromise in terms of design. Being the latest handset in the Xtreme Performance series, the Sonim XP2 Spirit is also the company’s maiden 3G cellphone, so if you pick this up, who knows – it could be a valuable artifact a few generations down. Let us take a closer look at what the Sonim XP2 Spirit can offer right after the jump.

Among the key Features of the Sonim XP2 Spirit include :-

Targeting folks who work and play in extreme environments, this next generation Sonim XP2 cellphone offers the highest level of ruggedness and a fresh new look. It is good looking enough to be used outside of the workplace in more relaxed, social settings, and what we are more interested in would be the unconditional three year guarantee. That is something unheard of this day, and we are pretty impressed that Sonim is willing to put money where their mouth is, hopefully nobody would abuse the clause of this unconditional guarantee during their use of the XP2 Spirit. For the more technical folks, the XP2 Spirit is certified military standard MIL 810G, allowing it to shrug off thermal shock, extreme temperatures, transport shock, solar radiation and salt water. Expect it to hit Europe from next month onwards for a yet undisclosed price.