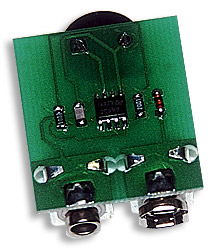 I realize that the title of this particular article is obvious, to say the least. After all, this tiny device is called the Sonic Nausea because it uses “a unique combination of ultra-high frequency soundwaves” to produce nauseous effects for those in its range.

The Sonic Nausea is also capable of causing “headaches, intense irritation, sweating, imbalance”, as well as making people puke. It is powered by a 9-volt battery that is actually bigger than the device itself. That won’t get you too much power, but it is possible to increase the runtime with six AA batteries with transistor clips.

The device is available at the SHOMER-TEC site for about $29.00, and the description states the possibilities are endless. For example: “hiding this device in your inconsiderate neighbor’s house might put an end to their late-night parties”. It went on to suggest other covert operations, such as hiding the Sonic Nausea in “the abusive bureaucrat’s office or the executive lunchroom”.

However, most of these examples are nothing more than petty revenge. I think the only situation that would justify using a device like this would be a hostage crisis or an unruly mob. The flashlight that induces puke was certainly designed for such events, but that particular device used LEDs, not sound.

I’m surprised that this vomit-inducing technology is readily available on the market. I’m not certain whether the power to make people vomit should be in just anyone’s hands. Chime in with a comment if you agree or disagree.