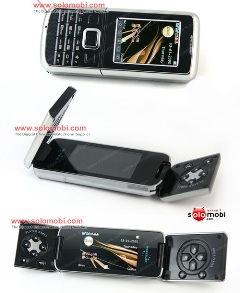 The Solomobi Cool8800C handset is available in China, but it is cooler than most mobile phones that I have seen in the West. Notice that the design looks like an iPhone with a screen and keypad that folds in on it.

Right now, it appears that you can only play old-school NES games on this mobile gaming system/phone, and it comes with three games preloaded. If you want to play other games, then you will need to load these ROMS into a trans-flash memory card.

The Cool8800C supports dual-SIM cards that can work at the same time, so you got game, times two. Yeah, that was a really stupid thing to say, but I love the look of this phone.

Another feature of the Cool8800C is that it has an ebook reader, FM radio, and can play some MP3/MP4 support. It also has an analog TV tuner, which might not work well in the Digital TV age.

Another limiting feature is that it only supports GSM 900/1800 frequencies. Still, you have to admire the fold-out gaming controllers, and this should be the model for portable gaming consoles for the future. If you want to get it in the present, then it costs about $140.