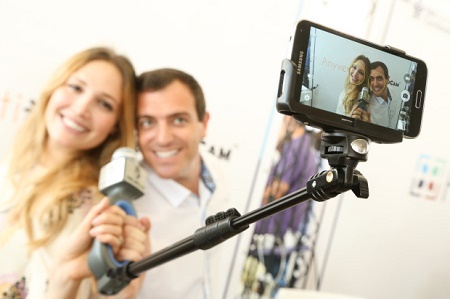 Everyone and their cousin is trying to become internet famous. Phones and cameras with decent video quality are readily accessible to the public, so there’s no stopping anyone from trying out a new idea. While a level of professionalism is needed to take something from small time to Hollywood, it’s hard to look the part on a regular budget.

If you’re a budding creative with an affinity for doing interviews and reporting who wants to take the Internet world by storm, you’re going to need to have a roving camera team to make it look the part. If you only have a team of you with little to no budget, you might be excited about the prospect of the SoloCam. This is a better version of the Selfie Stick with a microphone which is supposed to be far superior to what your smartphone is capable of. It also has a handle that will be far more stable and comfortable to hold.

This comes with a microphone which has a joystick controller that will allow you to access an app where you can read from a teleprompter, do live streaming, and use special effects. This will work for smartphones and GoPro cameras, giving you a range of devices to use. You can choose to get the regular version that comes with the app and microphone for $49, the Plus that comes with a stereo connector and a bag for $99, the Pro which gives you a better stick, adapters, and a better mic for $149, or the Limited edition which gives you an even better mic, a custom case, and a custom logo for $499.