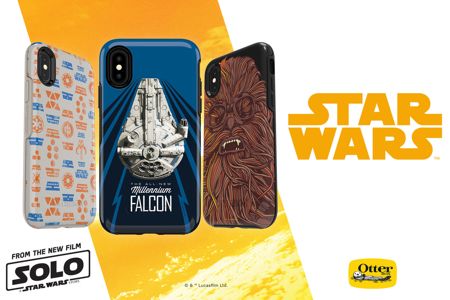 There is always going to be plenty of hype when it comes to anything that has to do with Star Wars. Han Solo, the handsome rogue of a smuggler who ended up falling in love with Princess Leia and fathering Ben Solo a.k.a. Kylo Ren, is going to get his very own backstory in Solo: A Star Wars Story. This is going to be a surefire box office hit, so why not ride on the potential success of the movie by having it tie in with merchandise for a smartphone? Otterbox, a name that has long been associated with quality protective products for smartphones and other tough accessories, will be rolling out the all new Solo: A Star Wars Story Symmetry Series cases that will provide protection for the latest Apple and Samsung devices.

Defending devices from both Apple and Samsung from everyday perils that road warriors face such as drops, dings and blaster bolts, these new cases will showcase a trio of galactic designs, paying tribute to the upcoming Solo: A Star Wars Story movie. You can be the most responsible, upright person in the universe, but this does not mean you cannot have a scoundrel like Solo to keep you company as your smartphone’s most trusted sidekick.

There will be the “Millennium Falcon” design that boasts of the shiny Millennium Falcon graphic, showing how that famous spaceship does not have a single scratch on her. “Chewbacca” is pretty self explanatory, letting you hear a Wookiee roar in the background through your imagination, while “All or Nothing” will show off symbols that point to a galaxy far, far away. Despite arriving in a sleek and slim form, the Symmetry Series will offer protection against bumps and drops. These dual-density cases can slip easily in pockets, and the raised beveled edge will ensure the touchscreen remains tucked away safely from harm during most drops.

Compatible smartphones with this Star Wars Symmetry Series include the iPhone 8, iPhone 8 Plus, iPhone X, iPhone 7, iPhone 7 Plus, Galaxy S9, and Galaxy S9+, with prices ranging from $44.95 to $54.95, depending on the make of your handset.