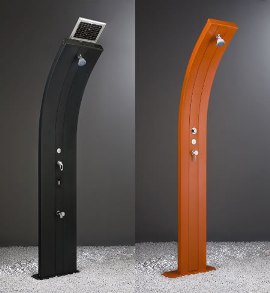 In all honesty, if you were going to show me this shower, I would probably still report on it based on its looks alone.

I don’t even care if it worked, just look at it! It’s just some sort of curvy tower that is just plain sexy. But better than that, it is solar powered!

Now you can enjoy a long, hot shower in the sunshine with this eco-friendly powered device. It even has a thermostat that can be set at 30/38 degrees Celsius for safety.

Remember that shape I was raving on about? Actually, the reason behind it was to create a head that is easily adjustable. The shower is also made to have some cold water that is perfect for rinsing the feet.

Now, let’s talk practicality. Apparently, this shower is meant to be used indoors, which means that the solar panel will definitely have to be mounted outside the house.

According to my source, the shower can be used outdoors. I’m not certain how much hot water you would want to take a shower outdoors, though. After all, if it is too cold outside, then it is sheer foolishness to shower outdoors. However, maybe this could be used on pool showers. The kinds you are required to use before jumping in the pool. You probably don’t want to use that much hot water if it is a hot day, so solar power seems the perfect power source for this occasion.

Of course, a lot of pools will have to be completely renovated just to match the look of this particular shower.

1 thought on “Solar-powered shower from Arkema”