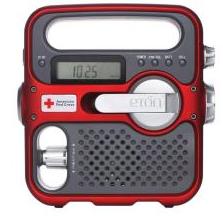 I’ve seen emergency devices before, but the SOLARLINK FR360 has four options for powering.

It has a solar charger on the top of the handle that isn’t visible on this photo, and it also has a hand-crank for charging the rechargeable Ni-MH battery pack.

Of course, those are the green power sources. You can also use 3 AAA batteries, or an AC power cable, which is not included.

The FR360 is clearly meant to be used in emergency situations, and is given the recommendation by the American Red Cross.

It comes with more gadgets than a Swiss Army Knife such as a radio with AM/FM reception and seven NOAA weather bands. It also has a built-in flashlight that is quite bright as well as a flashing red light.

Another thing that this has is a USB port which will allow charging for anything that can be USB charged. You had better make certain that your phone has its USB charger, buddy!

It also as a digital tuner, auxiliary input so that other audio sources can be utilized, and an alarm clock. Of course, if you want to use the alarm kit, you had better make certain that this thing has enough power.

All in all, the FR360 is a good thing to have around in an emergency. It is available for purchase for about $50 at the Eton Corporation site.