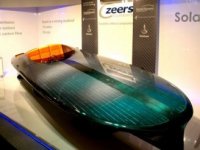 Solar power looks like it is here to stay, and we have so far seen solar powered cars being the Holy Grail in the fight to be independent of black gold, or rather, oil. Hybrid cars aren’t exactly catching on as fast as environmentalists prefer, and solar powered cars have not made the impact they were supposed to mainly because the technology is not yet there for a powerful, conventionally shaped vehicle that runs entirely off the sun’s rays. Never mind modes of transportation on land – here we have a solar powered speedboat that will slice through water pretty much in the same way an ordinary speedboat does, save for the fact that this one relies on the sun to power its electric engine instead.

Dubbed the Czeers MK1 prototype solar speedboat, this is the first of its kind in the world, and is capable of hitting speeds of 30 knots in full stride. It will come in shades of carbon fiber, solar cell and lush orange leather that makes it look truly out of this world. I wonder whether there will be wind-assisted versions in the future, but who knows? The Czeers MK1 is but a prototype at point of publishing, and was developed by the Dutch-based Delft Technical University Solarboat Team. Its original platform was an entry in the 2006 Nuon Frisian Solar challenge, picking up first prize whilst attracting some serious investment power from Rabobank so that a full scale test boat could be constructed.

Constructed entirely from 100% carbon fiber inlaid with leather trim, the Czeers MK1 features photovoltaic cells on almost all horizontal surfaces and an LCD touch-screen control system that will definitely drive any geek wild. It measures 10 meters in length, cramming in 14 square meters of solar panels and an 80kw electric motor. Not a single drop of oil is used, making this penguin friendly. Since it relies on an electric motor, you can bet your bottom dollar that no fumes nor engine noise will be produced, making this one quiet puppy. The current build rate stands at 4 to 8 boats a year, so these ought to cost more than your firstborn.