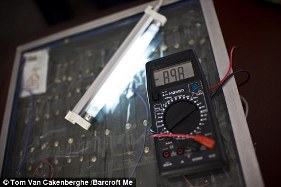 One of the problems with getting energy in developing countries is where to get it from. Some have resorted to silicon solar panels, but Milan Karki has found a simpler form of solar power that uses human hair instead of silicon.

That’s right, I said human hair. Renewable energy is possible with something that everyone but Lex Luthor has. The secret is in Melanin, the pigment in hair that makes color, and its electrical conductive qualities are the secret to hair solar power.

Of course, this is one of those technologies that is probably going to take years to develop, and its current stage can power only devices that operate with a nine volt battery. I don’t even know if I have any devices in my house that use nine volt batteries.

Still, I think Nepalese Milan Karki deserves some sort of award for his forward thinking. I never saw hair as a renewable resource, but think of all the hair in barber shops that will be harnessed for cleaner energy!

Why stop with just human hair? After all, most dogs shed their weight in fur every summer. Just brush your dog and use the excess fur for a solar panel.

In other words, if we could just build some sort of machine where you insert the hair in one slot and out comes a solar panel in the next, then we are going to have no problem with any energy crisis.