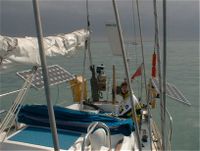 Scientists from the University of Tor Vergata, located in Rome, announced that they developed a new type of solar panel made with the pigment of blueberries. The panel, as opposed to traditional ones, eliminated completely the use of silicon. The result is a much cheaper product and more efficient to a certain extent because the panels are more flexible and in the near future they could even become transparent sheets.

The technology is based on the idea that organic semiconductors could reduce drastically the cost of production of the solar panels, which is one of the main drawbacks of this alternative energy source. It is estimated that the standard solar panels manufactured with silicon have an efficiency rate of 15%, meaning that the electric energy produced is 15% of the solar energy captured. The solar panels using only organic materials, like the pigments of blueberries, are achieving an efficiency of 4% in the laboratories, but the hybrid panels created with a mixture of organic and inorganic material are already presenting efficiency rates of 10% or more, close to what current commercial panels offer.

The usage of organic material in the production of solar panels could accelerate the pace at which the cost per watt is decreasing. The retail cost of a photovoltaic system would cost as much as $10 per watt in 1990 while in 2005 it was costing somewhere around $5. This alternative energy source has spread around the world mainly in regions that could not rely on traditional sources or in places that presented strong governmental incentives. If the technology keeps evolving steadily, though, it looks like that it will start competing directly with standard energy sources.