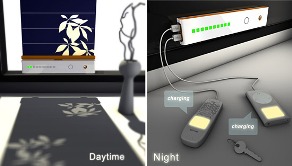 One of the problems with solar power is the sun. Yeah, it’s got this thing, where it just isn’t out all day, you know?

Okay, that was a bad intro, but you know what I’m talking about. I’m sure that you have seen all those solar-powered chargers before, but they are a lot like those electric screwdrivers that take an hour to charger for only five minutes worth of use. Not only that, you have to put the charger in some place out in the sun.

It makes sense to put a solar charger on a window blind, doesn’t it? After all, it is a blind’s job to keep out the sun, and it faces the sun every day, right? This is the initial concept behind the Some Shine Solar Energy Storage System.

All you need to do is put up the blind and pull it down to plug it in to the battery pack base. As the sun beats down on the blinds during the day, all that formerly wasted energy will be stored for later use.

Then, right before the night falls, you pull up the blind and plug in your mobile devices into the battery pack base. They will be all charged by the morning, and you can pull down the blind and the process begins anew.

Sadly, this Some Shine Solar Energy Storage System is merely concept for now, but it really should be out now. Then again, what do you do if it is cloudy?