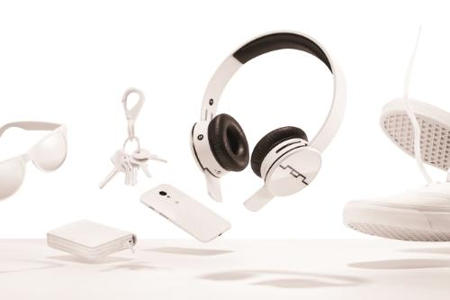 Sol Republic, a company with a passion for music and great sound, has teamed up with Motorola, and their partnership has resulted in the birth of the Tracks AIR wireless headphones. Of course, you might not think much about this particular pair of wireless headphones since they are dime a dozen in the market, but the Tracks AIR intends to be different as it claims to merge stellar sound, an unmatched 150-foot wireless range, dual-device connectivity and an unbelievable 15-hour battery life in a single device, delivering on-the-go convenience that active music lovers will love to have. Not only that, you can also be hip wearing one of these puppies thanks to a quartet of different interchangeable headband colors.

What makes the Tracks AIR wireless headphones different from other wireless headphone offerings in the market? Well, the inclusion of the A2 Sound Engines would definitely be one of them, allowing the Tracks AIR to deliver a music experience that has solid bass, clean mids and vocals, and extended highs. In fact, it is said to have been specially developed for Bluetooth audio, and it will also be extremely power efficient, giving you the leeway to crank up the volume and bass punch without adding extra stress to the battery drain.

As mentioned earlier, the Tracks AIR would also come with an unmatched wireless range which delivers clear and precise sound up to 150 feet away, making it nearly five times more compared to other wireless headphones. This would allow users to roam about with a greater degree of freedom, and it will also be able to pause your music halfway so that you are able to answer or ignore incoming calls using only the controls on the sound engine.

The asking price for the Tracks AIR wireless headphones? It stands at $199.99 a pop if you are interested.