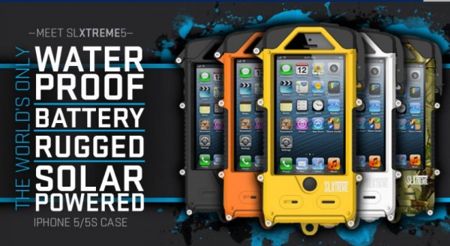 So, you have just gotten yourself a spanking new iPhone 5s, and would want to do your level best to make sure that it does not end up scratched unnecessarily. This line of thinking is certainly one that continues to drive the evolution of the smartphone accessory game forward, and the latest protective case for the iPhone 5s would be one from the folks over at Snow Lizard, where they have unveiled the SLXtreme 5. The SLXtreme 5 has been described to be the ideal iPhone 5/5S case for those who want to bring their smartphone along on outdoor adventures, as it will boast of ultra-rugged, waterproof protection in addition to battery-boosting technology.

Steve Calle, CEO and Co-founder of Snow Lizard Products, shared, “The SLXtreme line has a proven track record of protecting and enhancing iPhone usage while tackling the harshest outdoor conditions. We are excited for consumers to check out the SLXtreme for the iPhone 5/5S as it shields against drops, spills, providing peace of mind that their investment is protected.”

Just what kind of technological wizardry will the SLXtreme 5 bring to the table? For starters, it will come with an integrated 2,550mAh battery which should be able to double the life of an iPhone 5/5S. Not only that, you might be in the middle of nowhere and the SLXtreme 5 has run out of juice, what next? Fret not, since this puppy would be a firm favorite of any Scoutmaster since it also sports a built-in solar panel just in case of emergencies where you need power on the move – only when there is sunlight available, of course.

The SLXtreme 5 was specially designed to be waterproof up to 6 feet (2 meters) with a rating of IP-68, all the while ensuring that the iPhone 5’s functionality would be maintained, making it a decent addition for those who love to capture photos while they are underwater – snorkelling in this case, of course, as it would not be able to survive a bout of diving. You can pick up the SLXtreme 5 in Black, Orange, Yellow, White or Hunter Camo shades for $149.99 a pop, clearly making this one of the more expensive models out there.