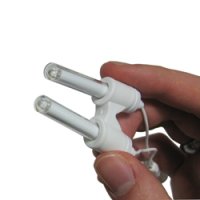 Folks who suffer from hay fever as well as other nasal allergies constantly whenever the seasons change will be pleased to know that there is yet another device out there in the market which could help them combat their respective maladies – the SneezerBeam is one of them.

SneezerBeam is a non-invasive light therapy that treats allergic symptoms such as congestion, runny nose, watery eyes and a headache using only light. SneezerBeam works by using two combined beams of light to inhibit the cells in your nose that release histamine, which is at the center of what triggers your allergic symptoms. The technology is based upon a clinical trial on 40 patients suffering from allergic rhinitis. During the trial 20 patients were given the same light therapy used in Sneezer Beam and 20 received a placebo. The results showed 72% of patients using the light therapy showed a marked improvement of their symptoms (compared to just 24% in the placebo group) and were published in the Annals of Allergy, Asthma and Immunology.

Don’t worry about being too dependent on the SneezerBeam as this is one drug-free device that won’t leave you with any side effects. For £39.95 a pop, it is well worth a try especially when you’ve run out of options to combat your allergies over the years. Just don’t share this with anyone else for hygienic purposes.