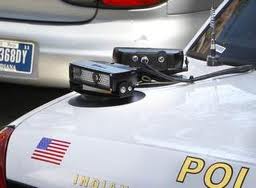 Some Police Departments in the U.S are going high-tech to help fight crime. They’re installing their patrol cars with automatic license plate readers or ALPR’s. These cameras read license plates of parked and moving cars — hundreds per minute and they can take pictures of the plates as they pass by. If a suspect license plate number is read, audible and visual alarms can alert the officer within milliseconds of the license plate’s capture.
The cameras can also take snapshots of the vehicle itself, along with the date, time, and location. Officials say that if conditions are right, the camera’s can even get a shot of the driver. I guess these things make for a pretty good case against the bad guy.
Officers can now scan plates like wildfire, and some of the units will even scan, run and hold the information from an entire shift. Not only that, but this new device is gonna make merely driving through a parking lot a gold mine for officers.
Law enforcement agencies across the United States have lauded the system for greatly enhancing criminal investigations.
In both Los Angeles County and in Cincinnati, police say they have used data collected from these devices to track down murder suspects. The Long Beach Police Department has recovered nearly 1,300 stolen vehicles and arrested 208 people in three years from hits in the system.
Oh yes… Big Brother is watching you.