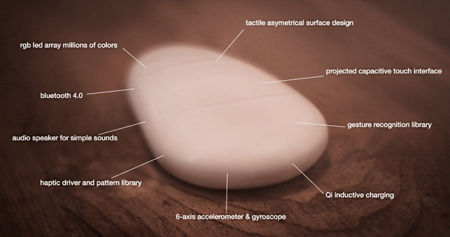 Ever wondered whether there are different ways to communicate with one another apart from what we already have today at our disposal, which is an embarrassment of riches actually? Well, here is an idea that might just take off in a big way down the road, although I would say that there is also the chance of it bombing, so to speak, if it never really managed to end up being a successfully funded idea over at Indiegogo. I am referring to the Smartstones Touch, which certainly does sound fantastic in theory – but will it be able to hold up in reality? Let us find out after the jump, shall we?

The Smartstones Touch happens to be a unique device, which functions as a haptic, wireless, non-verbal communication device for folks who would want to make use of it in order to express themselves using only touch and gesture. With but a single tap, swipe or hand motion, the Smartstones Touch will then enable folks to send out short messages to just about anyone else, and it does not really matter where they are in the world.

Talk about the Smartstones Touch being a truly a personal, more natural method of communicating! It has been designed to increase the sense of presence between the people in your circle, and best of all is, there is no screen for you to look at – which translates to not having a complicated interface, too. The Smartstones Touch has been designed for accessibility and inclusiveness right from the get go, allowing just about anyone to use it to connect with the world in ways never before imagined.

One can send and receive messages on the Smartstones Touch through multimedia messages that are known as “hapticons”, which will merge full-color LED lights, sound, and haptic vibrations, resulting in a memorable pattern which is a snap to remember as a certain message, making it close to being a limitless language that is ready and waiting to be shaped by its users in the long run.