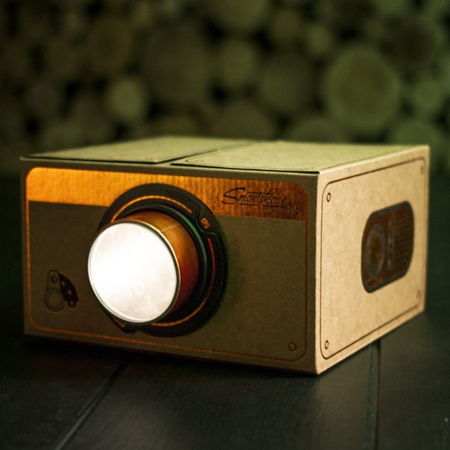 A smartphone is a smartphone, and so too, is a projector just that, although the world of convergence technology has seen the likes of Samsung make a move to integrate a projector into a smartphone a few years back. That did not prove to be a hit among the masses, but it still was quite a decent idea that never really took off since the final device did not exactly excel in its work. Enter a peripheral that might just make you love your smartphone all the more — the £19.99 Smartphone Projector 2.0 which will arrive in Black & Gold and Copper shades.

It does not matter if you are looking forward to your weekly YouTube shows or even shorts, such as the weekly dose of Honest Trailers, you can always enjoy having a blown up view with the smartphone alone — aided by the Smartphone Projector 2.0, of course. With the Smartphone Projector 2.0, you will be able to transform everyday YouTube videos into grand cinematic events, where it will also perform its task of projecting films from your smartphone onto the wall. This is made possible thanks to a high-quality glass lens with an impressive 8x magnification, and it itself is made from rugged cardboard printed to look like a retro projector. Since it arrives fully assembled, there is no need for any kind of construction. Pretty cool, yes?