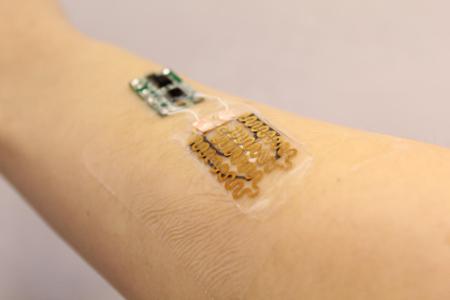 Fancy getting your wound healed in double quick time? While none of us happen to have the accelerated healing factor of Wolverine or Deadpool, this does not mean that we cannot get some help from modern day science. The “smart” prefix has made its appearance across various everyday items such as smartwatches and smartphones, but what about a smart bandage? Enter this new kind of medical apparatus that would not only cover your wound, but it can also monitor and medicate chronic wounds without requiring you to check up on it.

Currently a prototype model, the smart bandage will feature its very own microprocessor that allows it to make the right decisions as and when required. Chronic wounds are something that have been proven to be difficult to treat, as a fine line needs to be drawn so that it does not end up getting over-treated. Doing so would subject patients to ingesting more antibiotics than what is required. Hence, a smart bandage that dispenses medication only when it is supposed to.

A research team at Massachusetts’ Tufts University is behind this 3mm thin prototype bandage, where it is made up of transparent medical tape, a heat-activated antibiotic gel, and flexible electronic components. A component within can measure the pH value of the wound, and should it be more than 6.5, it would mean the wound is infected. A temperature sensor will also detect the heat associated with inflammation, while other sensors in the future will be able to measure oxygenation levels, pointing to the wound being healed.

The microprocessor’s job is to analyze the readings from the sensors in order to figure out whether it needs to temporarily activate the integrated heating elements in order to release more antibiotics to the wound or otherwise. Since most of the components are relatively inexpensive, they can be discarded upon removal of the bandage, while the microprocessor can always be disinfected and reused later on.