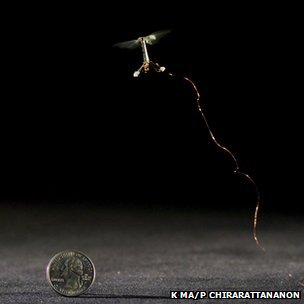 Do you think that robots are cool? If you think so, then you would be pleased to hear that scientists in the US have managed to come up with a robot that is as small as the size of a fly, where it is capable of performing the agile manoeuvres of the ubiquitous insects. Known as the “robo-fly”, it is built from carbon fibre, tips the scales at a fraction of a gram, and boasts of super-fast electronic “muscles” to power its wings. According to the robot’s developers from Harvard University, these small robots do resemble the real thing, and could eventually be used as an accessory when it comes to rescue operations. Definitely useful in the event of an earthquake, where it can navigate through tiny spaces in collapsed buildings to search for survivors.

Unfortunately, the flight of this small robot insect remains tethered, as it will take a few more years before this flying robot is able to carry a power source. touted as the world’s smallest flying robot, it will feature the fly-like agility which enables the insects to evade even the swiftest of human efforts to swat them. Of course, swatting a robot like this might break the heart of the inventor, since I am quite sure that these robots are not going to come cheap. Precise wing movements allow it to fly are swiftly and in an agile manner.

This robot will constantly adjust the effect of lift and thrust by acting on its body at an incredibly high speed, hence the insect’s (and the robot’s) wings will allow it to hover, or to perform sudden evasive manoeuvres. Similar to a real fly, the robot’s thin, flexible wings will beat at approximately 120 times every second. This wing speed is achieved using a special substance called piezoelectric material, and will contract each time a voltage is applied to it. Other than rescue operations, I am quite sure that the military would have more than a passing interest in such a robot, too.