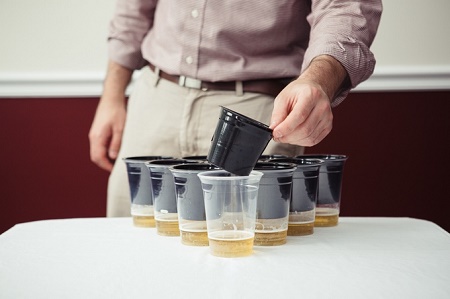 Do you enjoy partying with all of your bros? How about drinking an unhealthy amount while playing games that encourage you to drink more? If you’ve heard of beer pong, then you likely know what you must be willing to deal with to play. Not only are you going to drink a fair deal of beer, but you must also be ok with the same ping pong ball landing on the floor, rolling under the counter, being touched by way too many people, and splashing into your drink.

Coming from a college town, I understand what this game means, but the notion of playing was far too gross to try. The Slip Cup might make me reconsider, since it tidies up the game quite nicely. This is a cup inset for plastic 16 and 18 ounce cups that will catch the ball so it won’t end up floating in your cup. These are just large enough to provide you space to play with beverage levels for 6, 10, or 15 cup Pong.

The rims of this are very slim as to not affect your shot, and there are plastic tabs cut into the sides that will hold the ball in place after it has gone in. They swing in to hold in whatever goes in, but will still stack easily. The cups are numbered, and because they don’t want you to get bored, the company making these devised 15 new games you can play. Only $5 will get you a set of 20 of these cups, or you can spend $20 and get 80 of them for more raucous occasions.