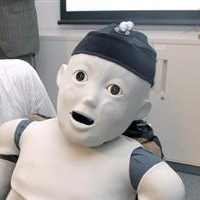 Robotics and AI have evolved a lot recently. Japanese scientists have unveiled a robot that merges these two technologies to create a mechanic toddler. It’s called the CB2 or “Child-robot with Biomimetic Body”. Though it’s designed to emanate ‘child-like charm’, I think it’s quite freaky.

Strange or not, the technology behind it are pretty advanced, and it shows quite a lot of potential for future improvements.

Instead of slow, typically robotic responses and movements, we see quick and natural squirming, much like a baby’s.

The robot is designed with an AI that allows it to act much like a 1-2 year-old baby. It has natural reactions to stimuli, recognizes objects, sounds and has an advanced tactile system.

For the quick and natural movements, traditional servos have been replaced with 56 pneumatic ‘muscles’. The sheer count allows for natural motion, while the system gives them speed. The not-so-cool part is the need for air tubes, so the robot isn’t completely autonomous.

It has microphones for eyes and two cameras for eyes. The eyes also move rapidly and track what’s happening around. Additionally, it has 197 tactile sensors that allow it to react to touch.

Its creators are interested in commiting a lot of their time in order to teach it how to walk or talk, and also to raise its intelligence to the level of a 3-year old.

Here’s a video of the 33 kg-heavy and 130 cm-tall robot in action. What do you think about it? Cute or creepy?