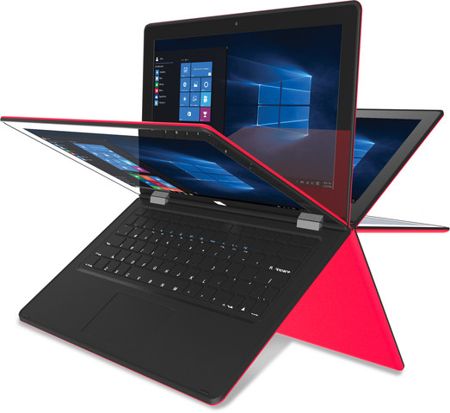 A laptop is not just a laptop in this day and age. If you were to notice, the trend of having hybrid laptops have been growing from strength to strength in the past few years, with notable manufacturers like Lenovo taking point in this particular market. So far, Apple have refrained from this 2-in-1 hybrid laptop concept that will see a regular laptop transform into a tablet because of the extremely versatile hinge, perhaps not to cannibalize on their own iPad market. Still, on the Windows front, there are many other players who are more than willing to take this step, and SLIDE is one of them with the SLIDE LAP116.

What you see in the SLIDE LAP116 happens to be a convertible laptop that delivers an ideal computing solution for those who are always on the move. It is a fully powered laptop that runs on Windows 10, sporting a detachable keyboard that ought to help you maximize your productivity as you are on the move. The LAP116 boasts of 360 degree rotation, running on an Intel Quad Core processor, accompanied by 2GB of RAM, 32GB of internal storage, a 2MP front-facing camera, a 10,000mAh battery, Bluetooth and Wi-Fi connectivity, and Windows 10.

As for the two 10.1″ TAB100W and 8″ TAB800W, they will run on Intel Quad Core processors, sport Bluetooth keyboards, Wi-Fi connectivity, memory card slots, 800×1280 IPS HD screens, and Windows 10 as the operating system of choice.

The TAB100W will come with 2GB of RAM and 32GB of internal memory, a 2MP front-facing camera with a 5MP camera at the back, alongside a 6000mAh battery. As for the TAB800W, it will feature half the amount of RAM and internal memory as the TAB100W, while carrying an improved 8MP camera at the back with a smaller battery of 3500mAh in capacity. Some of the accessories include a charger, cable, and screen protector, among others.