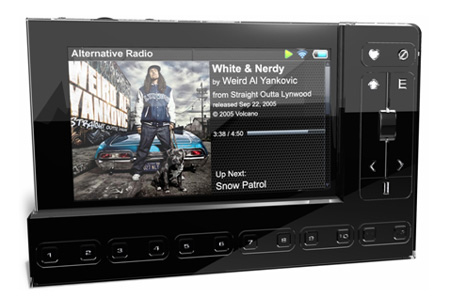 Slacker.com is the name of a new radio network based on the concept of personal radio, just like Last.fm or Pandora, but that’s not all. When you use Slacker, all you need to do is enter your preferred style of music, favourite band, and then listen to the songs anywhere you want using the Slacker Portable Player, a gadget that has a 4” screen for displaying album art and artist information, or even in a Slacker Car Kit that receives satellite radio transmissions and stores it so you never need to worry about losing the satellite signal again.

The Slacker player has a lot of potential, and could even be the iPod killer that everyone is waiting for. The player will have 2 GB of flash memory and will connect to any Wi-Fi network to update the songs automatically. Other versions with 4, 8 and 120 GB are also in the plans. If you want to, you can also download a jukebox program and run it on your PC. There are a lot of radio stations to choose from, which you can customize with the attribute sliders. You can also mark your favourite songs with the heart button, and even ban the songs you never want to hear again. The service has a free version, which has some ads in it, and a premium version is going to cost you US$ 7.50 per month.

The company has in its staff such experts as the ex-CEOs of Musicmatch, Rio and iRiver America, so they seem to know exactly what they’re doing.

You can read more about it at The Guardian or at the Slacker site.

3 thoughts on “Slacker Portable Player, Will the Real iPod Killer Please Stand Up!”