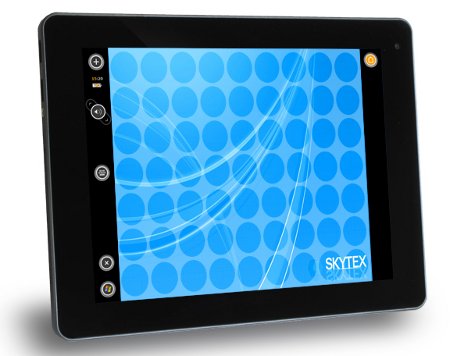 When we talk about tablets these days, there really isn’t any other comparison apart from Android-powered models and the iPad family – anything else really isn’t going to make the news. Having said that, Skytex Technology decided to throw their lot into the ring with Windows 7 by offering the EXOPC, which delivers a customized version of their touch-centric user interface to the SKYTAB S-series tablet device.
Underneath the hood lies a dual-core Intel Atom N550 processor, where it is touted to be the ultimate in mobile computing. It will merge the portability of a slate or tablet alongside the flexibility and familiarity of Windows for those who have yet to take the plunge into the world of Android or iOS.

HTC has their HTC Sense, and Skytex intends to impress with their EXO UI (user interface) which is said to deliver an additional layer of touch-friendly features and apps to the Windows 7 ecosystem. Coming in a sleek and functional design that will sport a vibrant and crisp 9.7 capacitive multi-touch display right in front, this display is capable of recognizing up to 4-points of touch recognition. Not only that, the display has a 4:3 aspect ratio which makes it ideal for reviewing and editing documents, a suitable Web-browsing device, and if you so happen to be big on digital textbooks or eBooks, this would make do as well.
Intel’s integrated graphics will offer you the relevant graphical processing power, while 2GB of DDR3 RAM should make sure you get to chug along nicely be it games or video playback, as well as offering painless document editing.
There is also an HDMI out connection that lets you connect easily to other compatible devices such as a projector, HDTV or an external monitor if you so happen to use this for your presentation – certainly beats carrying around a heavy laptop that will send your shoulders downward when you carry it around for a day. If you need to make video calls, there is always the built-in 1.3-megapixel camera and microphone, while Wi-Fi (b/g/n) connectivity helps you remain hooked up to the Internet without the need for another data plan subscription.
The Skytab S-series tablet will ship with Windows 7 Home Premium and EXO UI, where you can place a pre-order today, and shipping will commence from early next month onwards. Any takers?
Press Release