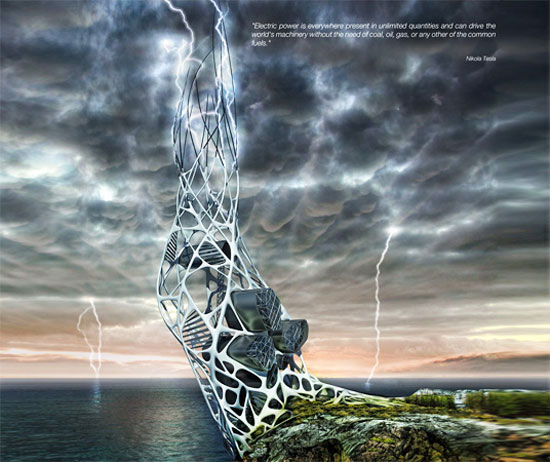 This building is one of those concept buildings that I probably will never see built, but it certainly is downright useful.
This Hydra skyscraper is made of graphene, which is light, strong, and very conductive of electricity. You will note that this structure is one big lightning rod, and there is a lot of open space on this building.
My source says this is a giant Faraday cage, which can direct the electrical energy around and then into capacitors for storage of energy. Then, using electrolysis, the water below can be split into hydrogen and oxygen for a fuel cell.
This is a pretty good idea, and I have always wondered why we don’t just harvest the natural raw power of the lightning. After all, there are an average of 500,000 megawatts worth of electrical power in each one. According to my Source, that is about as much electrical power that the United States uses at any given time. However, you want to try and catch something that never strikes the same place twice?
The only way this would be efficient is if there was a thunderstorm going on, and we could somehow harness the energy from that through a lot of rods below or something. That’s what Dr. Frankenstein had to do, at least in the movies. I have no idea if the book is different, but it probably is.
Source