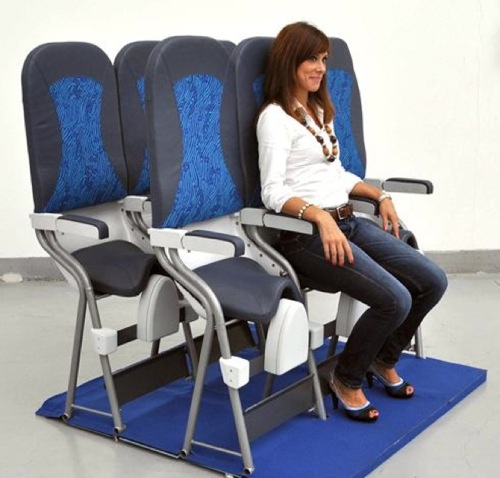 Flights are already cramped and uncomfortable enough that I often find myself longing to just take a train ride instead.  Now one company is attempting to make flights even more cramped by creating a flight class below the current economy class.  Instead of sitting in seats you’ll be stuck with a slanted chair that allows for the chair in front of you to be even closer.

Sure, I found myself longing for cheaper flights while booking my honeymoon recently, but I’m definitely not desperate enough to ride in a chair like this.  Then again, if you’re only taking a 1 hour flight, perhaps you won’t mind that there’s only 23 inches between your seat and the one in front of you.    To give you an idea on how close that is, the absolute smallest economy class flight has 31 inches.  Thankfully, so far SkyRider hasn’t been picked up by any airlines, but they are presenting the idea next week at the Aircraft Interiors Expo Americas.  Then again even if someone did pick up the idea, you’re not forced to ride in the seats, there will just be a cheaper cabin class below the usual economy class.