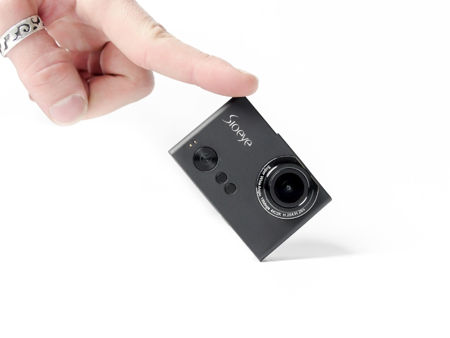 If you happen to own an action camera under your care, then chances are pretty high that you would have your fair share of gripes concerning it, never mind the fact that the action camera itself does come with a fair bit of benefits that have aided you greatly in your work. Basically, it takes a whole lot of your time to download, edit and share videos, and majority of the other footage stored would remain stale and forgotten on SD memory cards. Sioeye intends to make this a thing of the past, taking advantage of their strong connections to the mobile phone industry, in order to debut of the Sioeye Iris4G. The Sioeye Iris4G happens to be the first unlocked, wearable smart-camera which will be able to broadcast live video through 4G LTE mobile networks in real time.

In order to coincide with its launch, Sioeye has already unveiled its updated website, not to mention to share a video on YouTube which will ask the rather provocative question: “If no one is watching, did it really happen?” David Abramowski, the general manager of Sioeye, mentioned, “We’re providing a brand new service that didn’t exist before today. The Sioeye experience has three components: a connected camera, the Sioeye Cloud, and the Sioeye Social Apps. Together, they help athletes and viewers connect and share real life adventures like never before.”

Sioeye might sound rather difficult to roll off the tongue, but that is because this is an acronym of the phrase, “streaming Internet of everything you experience,” and first announced their maiden Android smart-camera in November last year, with a promise to deliver it sometime in early 2016. It is nice to know that the first quarter coincided with that promise this year, as the Sioeye Iris4G has already begun to ship.

The Sioeye Iris4G can be best described to be a self-contained, unlocked Android device which will be able to hook up to just about any of the top 4G LTE networks in the U.S. as long as there is a valid SIM card to go along with it, which users will be able to purchase separately from any major carrier. Apart from live streaming, the Sioeye Iris4G will also be able to shoot high quality 4K video, slow-motion, still photos, burst photos, and time lapse from a compact and lightweight camera body.

The Sioeye Iris4G will retail for $499 a pop for you to capture all of those adrenaline pumping scenes without missing a beat.