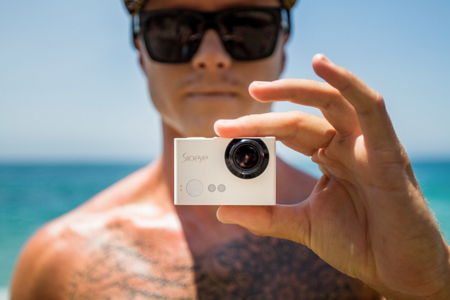 Whenever there is a mention of an action camera anywhere, chances are one would think of the GoPro series, or perhaps some other one-shot attempts like the Nikon KeyMission 360 action camera. Well, Sioeye does not want to miss out on the action either, and their Iris4G Blink Edition brings something special to the table — for the very fact that this is the first retail-ready action camera in the market that will boast of integrated 4G LTE live streaming capability.

It will be Sioeye’s second 4G-enabled action camera to hit the market, allowing sports enthusiasts to be able to capture and broadcast adventures in real-time. Of course, this works great if the area you are in has 4G coverage, but for the more adrenaline pumping attempts that tend to place one outside of well covered areas, then chances are the live streaming capability is not going to come in handy at all.

This will be the follow up to Sioeye’s first device which was released last year, the Sioeye Iris4G 4K. The Sioeye Iris4G Blink will hit the US some time in the second half of the year, where it will feature integrated live streaming in addition to High Definition video capabilities. Not only that, Sioeye is also adamant on expanding its market share by extending streaming capabilities to YouTube Live. We really wish there was a 360 cam with those features, but for now this one will do.

The Sioeye Iris4G Blink will open the doors for action sports enthusiasts and pros to live stream video, audio, and real-time stats — which include speed and altitude overlays to their fans, all with but a single touch of a button. Of course, if 4G LTE connectivity is unavailable at the moment, there is always 3G or Wi-Fi connectivity to fall back on.

The Sioeye Iris4G Blink live streams at 480p with 30fps, while simultaneously record HD video to local storage during a live stream session and runs on Android 6.0 Marshmallow, equipped with an internal GPS and barometer sensors. It can also snap 8MP stills, and will come with an asking price of $249 a pop.