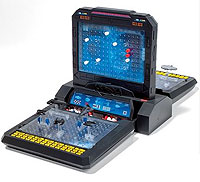 The world is divided into two types of people – those who absolutely love Star Wars and all of its nuances and those who loathe this piece of fantasy science fiction with a touch of mythology and hokey religion. Thankfully, there are way more of the latter that keeps the Star Wars merchandise machine going for decades ever since Luke Skywalker graced the silver screen almost 30 years ago. Hammacher is currently carrying the Star Wars version of the classic board game Battleship for a $59.95 price tag. Unfortunately, those who are living out of the Continental U.S. and Canada won’t have any luck bagging one as Hammacher will not ship it anywhere else.

This electronic version of a pen-and-paper classic comes with sounds and images of the Star Wars series in up to a quartet of different strategy games. You can choose between solo play and player-to-player challenge, depending on whether you are a hermit or otherwise. The entire Star Wars Battleship Game comes with a “tutorial” that guides players through all the different games with digitized voice commands.

Instead of destroyers and aircraft carriers, players now have to knock their opponent’s Star Destroyers, X-Wing space fighters, the Millennium Falcon, and other iconic ships from the Star Wars franchise out of orbit courtesy of a wide variety of weapons including ion cannons, concussion missiles, and proton torpedoes. Once you’re done with the game, you can replace all the ships back into their respective storage spaces and folding it up to a compact, notebook-sized component for enhanced portability. The Star Wars Battleship Game is powered by a trio of AA batteries.

1 thought on “Sink that Star Destroyer!”