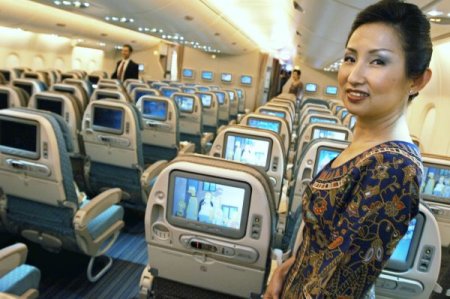 With the deluge of budget airlines making their presence felt all over the world, no thanks to rising fuel and operating costs, it is nice to see a major airline continue to make profit without compromising on the quality of service. Singapore Airlines has just announced that it will be offering flights featuring iPod and iPhone connectivity on KrisWorld starting from yesterday. This privilege can be found on all newly reconfigured Business Class Airbus A340-500 flights between New York and Singapore, as well as routes between Los Angeles and Singapore from this August onwards. I suppose after forking out enough cash to buy a kidney (and then some) to fly halfway across the world, it makes perfect sense to have this added touch of technology available to travelers who prefer to watch movies of their own choice on the iPod/iPhone instead of subjecting their senses to the mercies of in-flight entertainment.

Each seat in Singapore Airlines’ KrisWorld in-flight entertainment system will be accompanied by a 15.4″ widescreen LCD display that makes it just nice to watch your desired TV shows and movies, while active noise-cancellation headphones further enhance the in-flight entertainment experience by doing away with external distractions. According to Yap Kim Wah, Senior Vice-President Product & Services, for Singapore Airlines, “Customers on our all-business class Airbus A340-500 flights now have an incredible way to enjoy their own iPod and iPhone music and video on the KrisWorld in-flight entertainment system. This is yet another example of our philosophy of creating customer satisfaction by providing an enhanced sense of choice and control.”

Listening to your iPod and iPhone won’t cancel out announcements and instructions made by Singapore Airlines cabin crew and pilots, so you know exactly when meals will be served as well as the weather conditions on the ground while going through the Transformers movie for the umpteenth time.