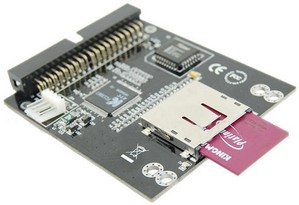 Flash memory is becoming cheaper every day. You can pick up a 2GB card for your camera for a little bit of nothing. With the ASUS Eee PC only having between 2GB and 8GB of storage, it makes me wonder if it wouldn’t speed up my computer considerably to get a small SSD drive for my computer, as they’re generally faster then traditional hard drives. Thanks to this cool adapter, I’ll be able to use one of my SD cards to do just that.

The adapter is about as basic and boring as it gets. All you have to do is insert an SD/MMC card, hook up a power cord and plug it into your IDE ribbon inside your PC and you’re all set. The adapter doesn’t require any special software or drivers to work, as it is simply recognized as an IDE drive by your BIOS.

This gadget isn’t going for most people. Tech enthusiasts and people looking to create embedded solutions will likely get the most out of it. The best part about this IDE to SD Card Adapter is that it won’t break the bank at $24.99.