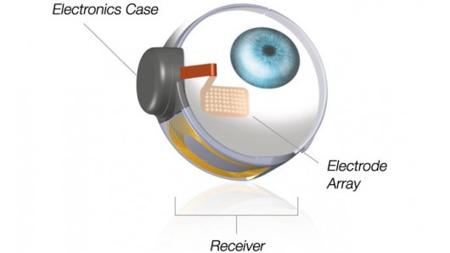 Out of the five senses that you have, which is the one that you would deem to be most important? It would be an extremely difficult question for me to answer, as I treasure my sight, smell, touch, taste and hearing equally – and lacking in one is more than enough to make life difficult. Having said that, I salute the indomitable human spirit and those who have achieved so much more than normal able-bodied folks even when missing one (or more) of the five senses. Having said that, there is some hope for the blind thanks to the efforts of Second Sight who came up with the Argus II Retinal Prosthesis.
This rather unique piece of technology will basically allow a blind user to “see” objects, as well as colors and movement within their environment. Just how is this achieved? Normally, it is done thanks to the assistance of a video-camera-equipped pair of glasses that is worn by the user. However, a recent experiment saw researchers do away with the camera, and they instead transmitted visual Braille patterns straight to a blind test subject’s retina.
The Argus II works this way – the prosthesis will be implanted in a blind user’s eye, where it will be placed with an array of 60 electrodes against the surface of the retina. The accompanying video glasses will be able to take in the view in front of the user, where it will then convert the video signal into electrical pulses. These pulses are sent to the implanted electrodes wirelessly, which in turn respond by selectively stimulating retinal nerve cells.
You won’t end up with normal vision, but they are more than capable of letting some users make out individual printed letters, now how about that? Imagine letting a user see braille right there with their eyes – since they are already so used to braille characters, it makes perfect sense to continue reading in that language, even though they can make out regular letters and numbers.
Source