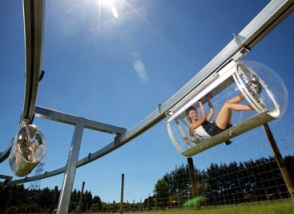 I’m not certain how this pedal-powered monorail system got to be called the Shweeb, but I don’t really care. And you got to admit, it is a very cool invention for something that rhymes with “dweeb”.

I mean, who wouldn’t want to travel in a transparent monorail car that moves not by machine, but by the user’s command? So go ahead and make those phone calls and text messages while you are behind the wheel. All you have to worry about is the car in front of you, and you can stop anytime. By the way, the Shweeb “car” moves faster than an ordinary bike.

Just to let you know, there is no plans to implement the Shweeb as a new system of mass transit. I’m sure a lot of you are going “Awww” right now, and that is completely understandable, because it sure looks like a lot of fun.

Still, single riders on one rail? That would never work in big cities. Can you imagine the traffic if someone died in mid-pedaling? Better to use moving sidewalks and plastic air tubes like on cartoons such as The Jetsons and Futurama.

However, if you want to ride the Shweeb, all you need to do is go to the Agroventures Adventure Park in Rotorua, New Zealand. It will cost about $30 to go on this three-lap ride, though.