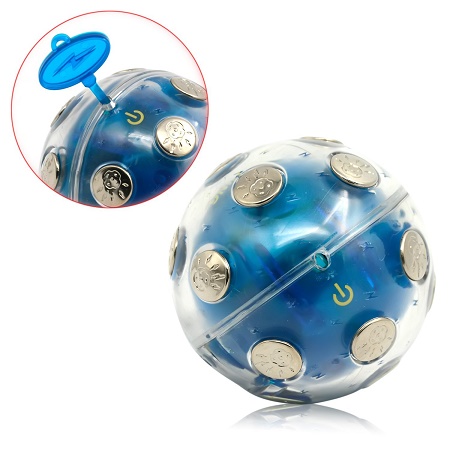 Some people like to play games that make them think, challenging their brains to solve impossible puzzles. Others like to go for the thrill of testing their bodies, either by putting their reflexes, skill or pain tolerance through the wringer (ever heard of the cinnamon challenge?). If you fit into the latter category and have a group of people coming over, you’ll want a game that can be played by the whole party, and won’t send anyone to the hospital.

While the Shocking Game is less about skill and more about chance, it’s certain to liven up any social gathering you might put together. This looks like a ball that has had dimes glued all over it, but is thankfully much more impressive than that. This ball will emit an electrical shocking pulse randomly between 10 and 30 seconds. During the time it’s sending out a pulse it will glow so you have an added visual scare of knowing what’s coming.

While there’s not exactly a set game aside from passing this around the room, I’m sure you could think up a variety of ways to make a suspenseful game out of this device. This is made of ABS plastic and metal measuring around 7cm in diameter, and will need 2 AAA batteries to work. Keep in mind that you likely shouldn’t have friends with pacemakers or heart problems play this, unless you actually do want someone in the hospital. It’ll cost you around $16.50, and will hopefully survive the drops and falls it will undoubtedly be subjected to.