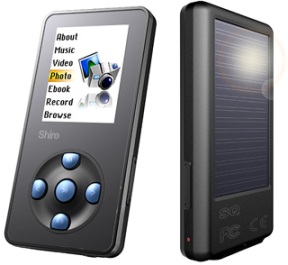 I’m not sure if the world needs another type of PMP, but I will definitely give Shiro credit for trying something different.

Shiro has put a solar cell on the back of the SQ-S, which gives the user the option to charge the device with the power of the sun. Considering that power to PMPs is always an issue for mobile music, it is refreshing to see a PMP that does not require a wired charging method like an AC cord or USB cable.

The user has the option of using a USB cable if he or she wants to. Just to put it in perspective, it takes six hours with a “full sun” to charge the SQ-6, but only four hours with the USB. With a full charge, the SQ-S is capable of up to 38 hours of music playback and 10 hours of video playback.

The screen of the SQ-S is a 1.8 inch 65K color display, made for both video and photo playback. The SQ-S comes with 16GB of built-in memory, but does not have a memory card slot. It supports formats of MP3, WMA, WAV, FLAC, APE, OGG, and M4A. It also has an FM radio and is capable of FM recording.

My source does not have a price or availability date for the SQ-S, but the solar powered feature could really change the PMP market. Unless some other company has already tried this already. How about it, readers? What’s your opinion on solar-powered PMPs? If you know something that I don’t, feel free to leave a comment.