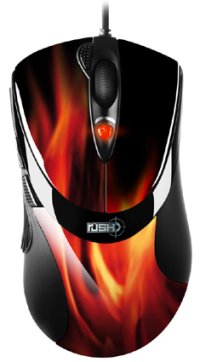 Are all gaming mice created equal? Obviously, the answer is a resounding “NO!” as there are different grades of gaming mice, just like how the supercar category is also broken down into further fragments that boast different strengths and weaknesses. Today we’ll take a look at the Sharkoon Rush FireGlider – where Sharkoon is not exactly a household name when it comes to gaming peripherals, but their latest effort does lend it an air of respectability. Just what does the Rush FireGlider feature? Well, it does share a fair number of similarities in most areas, but comes with its own special features to make it stand out from the crowd if you’re currently mulling over replacing that broken gaming mouse (due to frantic button mashing over the years, and slamming it down against the table in frustration).

Like any decent gaming mouse worth its salt, the Sharkoon Rush FireGlider is a laser mouse that has an adjustable refresh rate, ranging from 600 to 3600DPI on the fly. It also comes with a bunch of multi-colored LEDs on the device itself so that you know which DPI level you’re at, although some people might just prefer some sort of bar indicator instead of having to memorize the colors and numbers they represent. Teflon feet are also included on the bottom, allowing one to perform smooth movements over hard surfaces without missing a beat. It comes with an ergonomic body as well, but one drawback would be, it looks as though it isn’t going to sit down well with left-handed gamers according to the design which favors the majority gaming group. In total, there are half a dozen programmable buttons to give you that added edge during your gaming sessions as you program macros into them.

Two features that don’t come as standard are the high-gloss flame design which could come across as rather juvenile, while the weight tuning system (found in only some models from other manufacturers) will allow users to adjust the weight of the mouse according to their individual preferences or specific gaming situations. The internal magazine of weights allows one to play with a range of 118 to 135 grams, making sure your mouse remains stable even under intense gaming situations. The Rush FireGlider will retail for 25 Euros, which is pretty cheap, surprisingly.