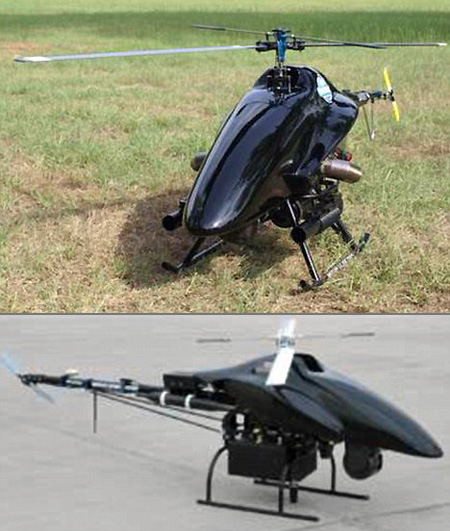 What you are seeing here is no toy helicopter, but the Shadowhawk UAV (Unmanned Air Vehicle).
This helicopter is about 49 pounds, and you probably want to watch the video after the jump to see it in action. According to my Source, the Shadowhawk is already being used to track pirates off the Horn of Africa. Apparently, it is also used to enforce law on U.S. streets.
It also comes with the option of turbine or piston engines, thermal cameras, range fingers, and laser pointers. For those who want some weapons, it is also possible to install 37 mm or 40 mm grenade launchers, 12 gauge shotgun rounds, or even taser batons.
Seriously, this thing is a miniature flying arsenal! You can watch on the video and see that it can travel at speeds of 50 miles an hour. You can also see what looks like a guy being tailed by one. I’m surprised he doesn’t try to throw a rock at the Shadowhawk UAV.
Man, I never want to be in a position where I have these things chasing after me! This would be like those spiders from Minority Report, but these Shadowhawks can fly. They can also bring me down with some grenades, live rounds, and possibly tasing me.