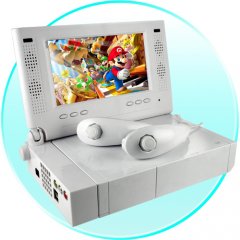 I absolutely love to play my Wii, and I would take it with me if I could. Clearly Chinavision had consumers like me in mind when they designed the Seven Inch Nintendo Wii LCD monitor.

This LCD monitor can attach to the back of the Wii easily, and the screen has a ball and socket hinge that can be turned appropriately for whatever use. When the monitor is not in use, the screen can be folded down against the Wii, just like a laptop.

There is even a reverse/up/down picture control that is available to fix the picture in case you need to mount this on the roof of your car, and wish to fold the screen down instead of up. You can also plug in other devices such as a DVD or other media players with the extra AV outputs, as well as USB peripherals.

As for power, the Wii LCD screen is powered by the normal Wii power cable, or the included cigarette lighter adapter.

You can purchase the Nintendo Wii LCD Monitor from the Chinavision site for about $101.45 each, or you can get 3 for about $97.39 each. I suppose buying in bulk is always cheaper, but considering the rarity of the Nintendo Wii these days, I honestly don’t see any consumer buying any more than one of these.