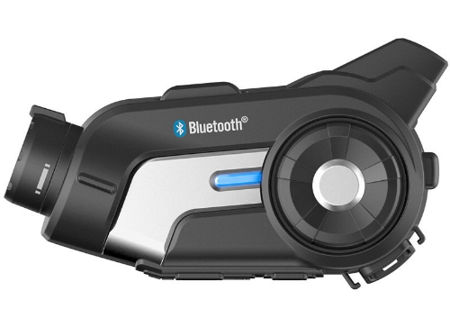 Owning a motorcycle is one thing for those who would like to get from point A to point B in the most basic manner without any bells and whistles, and at the same time avoiding traffic jams, but if you would like to “dress up” your motorcycle with something that is a whole lot more, then you can check out the Sena 10C Motorcycle Bluetooth Camera & Communication System, which is something that avid and adventurous motorcyclists can use, in addition to action sports athletes to boot.

For starters, the Sena 10C will allow one to enjoy crystal-clear intercom and phone communications at the same time boat of the ability to record high-definition video, listen to music and record music playing from connected mobile devices as live soundtracks, all crammed into a single device, now how about that for versatility? In order not to cramp your style, the Sena 10C will boast of an aerodynamic unibody design, accompanied by revolutionary Bluetooth 4.1 technology and will allow you to upgrade its firmware to make sure that it remains current with the latest features at all times.

The Sena 10C will be extremely intuitive as it features voice prompts and will inform the rider which mode the 10C happens to be in. The device can be mounted to the left side of a helmet via Sena’s unique clamp system, while the camera lens can be adjusted up to 30 degrees to be compatible with a wide variety of installations. As for its built-in camera technology, it can then record video at resolutions of 1080p at 30 frames-per-second or 720p at 60 frames-per-second.
Sena has also thrown in a microphone which will enable users to record their voice to their video, and at the same time, to enjoy four-way intercom communication within a 1.6 kilometer (1.0 mile) radius courtesy of Universal Intercom technology. There is also a special photo mode that has been thrown into the mix, so that users can capture 3.5 megapixel photos in single, burst or time lapse modes with the simple press of a button.

Other features include Advanced Noise Control, music sharing capability, a built-in FM radio tuner, easy operation with a versatile jog dial, an external antenna and settings which can be adjusted using the Sena smartphone app that are available for iPhone and Android. Expect the Sena 10C to be available for $349 a pop, where it will be accompanied by a two-year warranty.