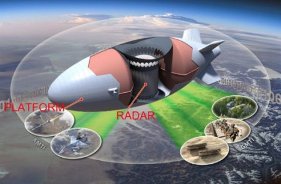 I once did some research on the invention of airships, and I was always disappointed that we didn’t end up living in an age where dirigibles fly around in our skies like giant birds.

It would appear that this concept high-altitude reconnaissance and surveillance platform known as ISIS (Integrated Sensor Is the Structure), could herald in that age.

Yes, this blimp is designed for combat zones, or at least hovering safely over them (about six miles over it). It is completely self-sustaining, because it can harvest solar energy to split water into hydrogen and oxygen. This is then used to power the fuel cells, and I am assuming that the water is drawn from the atmosphere. How else could it be self sustaining?

Oh hey, did I mention that it is fully automated? Apparently, it can go anywhere within 10 days. So, I don’t know about you, but I want to see a world where these self-sustainable airships populate the sky like giant cities. Hey, why not?

Believe it or not, I have heard that the first one of these blimps is expected to take flight in 2014. That year seems a little too premature, if you ask me, but I would hope to see one of these things flying over my head in my lifetime.