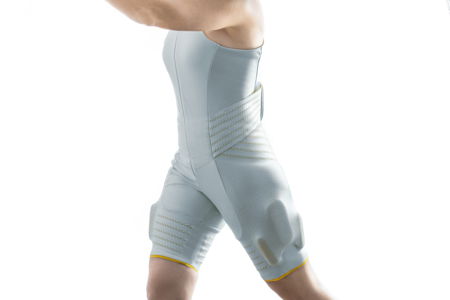 As technology continues to advance forward, more and more devices end up with its fair bit of electronics within in order to be smarter and function more efficiently. Seismic does not want to miss out on this bandwagon, which is why it has come up with a range of powered clothing that will be able to augment the kind of natural strength that you have. Seismic achieves this through a fusion of apparel and robotics, targeting a fast growing activewear market. The latest Seismic powered clothing will deliver products that not only look but feel like natural apparel, while functioning as an extension of the human body. In other words, you get to put on an additional set of muscles every single day.

How does Seismic’s suits function? For starters, it will support the body’s core by providing up to 30 watts of power to each hip as well as the lower back in order to support sitting, standing, lifting, carrying, and a slew of other activities. The robotic “muscles” will contract and relax, in a manner that is similar to that of regular muscles in one’s body. The suit’s interior pockets will be able to hold the removable hardware and rechargeable lithium-ion batteries in place.

Basically, everyone is a potential customer of Seismic, where the future of clothing includes the ability to enjoy a better lifestyle. Over the course of time, Seismic’s technology will advance, ending up lighter, smaller and more powerful, as the suit’s intelligence will optimize the wearer’s experience, learning curve and adaptation with each use. A trio of distinct layers make up Seismic’s powered clothing: the base layer, strength layer, and intelligent layer.

The base layer happens to be the apparel itself, where it functions primarily as an undergarment, and can double up as activewear on its own. It is in the strength layer that holds the robotic components which are located on the outer leg, extending up to the hip area, and including the lower back. This would replicate the functionality of muscles, tendons and ligaments. Not only that, there are also sensors that track the body’s orientation in addition to the force applied by each robotic muscle. As for the intelligent layer, it will be contained within an external pack that is worn on the lower back, making it the suit’s brain while borrowing from mobile and IoT technology.