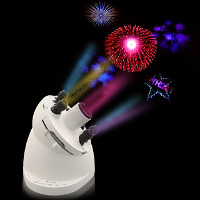 Fireworks are always a thing of beauty, but they can get pretty expensive when you want to make a grand show out of it. With the Sega Indoor Fireworks Projector, you no longer have to worry about your house burning down or singed hair – all you need to do is make sure they’re adequately powered and you’re good to go.

Resembling a small planetarium, this jaw-droppingly entertaining gizmo beams realistic virtual firework displays across walls and ceilings. It even blasts out suitably explosive sound effects. The only thing missing is the heady aroma of gunpowder mixed with boiled hot dogs. Impressed? You should be because the Sega is the world’s first indoor firework projector. Mains-powered, the Sega utilises six lenses, internal speakers and nine interchangeable image discs to replicate various awe-inspiring displays. All you do is select a mode, insert a disc and turn off the lights. Hook up to external speakers and we’re talking Beijing Olympics standard here, folks. We’ll even throw in three bonus discs containing messages such as ‘I love you’ and ‘Happy Birthday’.

Interested in picking one up for this coming Christmas? It won’t be that cheap though at £129.95 a pop, but to see the smiles light up on the faces of your kids with the Sega Indoor Fireworks Projector in action, now that’s priceless.