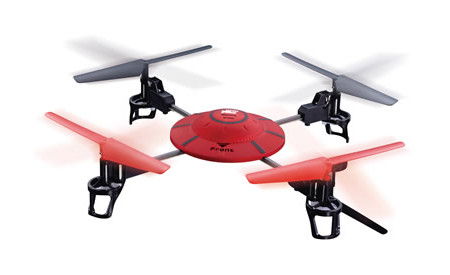 Drones – they seem to be the new buzzword when it comes to a remote control toy. After all, back in the 1980s, remote control toys were limited to racing cars, and that was it, although at times, there were robots that moved in an automated manner, changing its direction whenever it bumped into an obstacle, with flashing lights and a head that moves to the left and right to boot. Having said that, society is a whole lot more complicated these days, and hence, something so simple is not going to make the cut anymore. This time around, the $129.95 Secret Spy UFO ups the ante, where it is actually a drone that comes in the form of a UFO, sporting an integrated spy camera that allows you to shoot videos and capture photos mid-air.

There will be a quartet of helicopter rotors located atop a UFO body, where this maneuverable craft is capable of running your very own covert operation, including ascent and descent; left, right, forward and backward movement; hovering; flying sideways and even end-over-end, mid-air tumbling – it seems to be able to do it all. The remote has a button that would enable the digital camera to capture up to 8,000 pictures, or record up to seven minutes of 1024 x 768 resolution video, thanks to the built-in 2GB internal memory. You can access those photos and videos later on via the USB port, where the Secret Spy UFO will have a 150′ range and juices up in an hour, while the remote will run on half a dozen AA batteries.