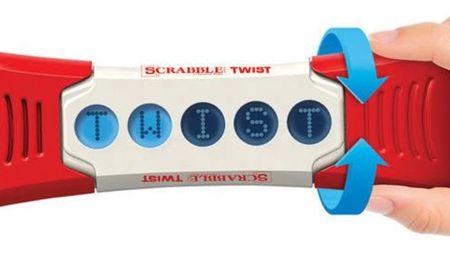 Do children these days get involved in board games? Not likely, I would presume. After all, they have all of those newfangled console titles as well as engaging mobile games that are far more interactive than a regular board game, although the one major disadvantage of a digital game is the fact that there are no physical tables for you to flip over when you get frustrated upon losing for the umpteenth time to the same opponent. Hasbro has taken a look at Scrabble, and decided that there is a whole lot more than they are able to do about it than to roll out yet another special edition version with new material for its tiles. In fact, they have come up with a handheld variation of the classic board game which has been specially designed for group play. We are looking at Scrabble Twist, a physical handheld game which is able to cater up to eight different people.

The $19.99 Scrabble Twist would be similar in nature to the original game, where you will need to build words using letters in order to score points, but Scrabble Twist’s, er, twist (for the lack of a better word) would be more of a hot potato version of the game than anything else. There are five letters which will auto-populate on the device, and users need to press them in sequence to come up with words, without having to use all five letters.

The moment a word is created, just twist the end of the device to lock it in, passing it on to the next person. You can choose from party mode (up to eight players), turbo challenge (two players) and solo (single player, duh!), where 15 seconds are what you have to make a word out of the letters. Of course, if you were to fly it solo, then you would have a full minute to come up with the word that you think can net you the highest possible score.