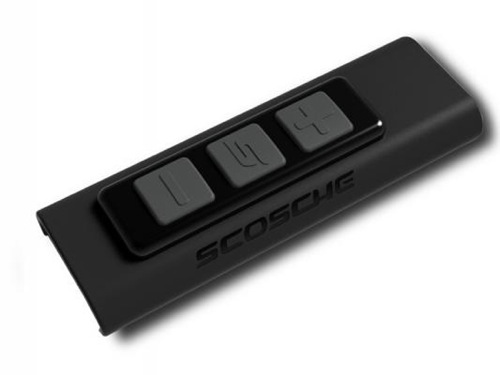 Although the fact that the shuffle has no buttons makes it look nice, it does make certain situations a little obnoxious.  Especially for those that enjoy listening to their Shuffle in the car.  In that case the headphones aren’t plugged in, which is where the controls normally are located.  With this Scosche case, it allows for you to control your iPod and has larger sized buttons to keep things easier while you’re on the road.  After all, trying to mess with buttons when they’re tiny can be a little dangerous while driving.

The Scosche tapStick case comes with a 3 foot long aux cable.  When you plug in your iPod, it leaves an opening to plug that cable in and then you can plug it into your radio.  These aren’t out just yet though, so you’ll have to tough things out a little longer.  You can pre-order them now though and they will be shipped out as of the first week of July.  To pre-order the tapStick it’ll cost you $29.99, which isn’t too bad of a price as far as iPod accessories go.