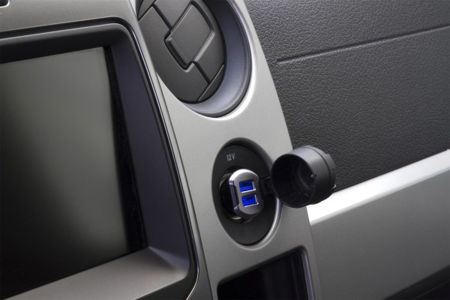 The modern day road warrior would have a fair number of devices that he or she totes around, and most of the time, we would have left the home with these devices fully charged. However, there are certain days where we are way too busy with our normal routine, using our smartphones, tablets, and even smartwatches more often than we normally do – and this would cause a massive drain on the batteries. Instead of fretting around, worried sick that your smartphone’s juice runs out before Waze can get you to that business appointment within the shortest time possible, why not ease all of those fears with a charger in your car? This is where Scosche steps in, with their Scosche reVOLT and reVOLT dual car chargers.

The Scosche reVOLT (model name USBC121M) and reVOLT dual (model name USBC242M) happens to be the world’s smallest, most powerful car chargers, and they will arrive in white/gold, white/silver, black/grey and black color combinations. You need not worry about toting around the latest iPhone and iPad models, since they are all compatible with both devices, and at the same time, plays nice with mobile devices that run on the Android platform as well. These critically-acclaimed car chargers are capable of delivering up to 12 watts of power in order to fully charge any USB-powered device within the shortest time possible.

The non-obtrusive and lightweight reVOLT and reVOLT dual will come with a low-profile design that fits flush in most vehicle power sockets, and it will go about its task in an inconspicuous manner, charging up those thirsty batteries on your mobile devices at rapid speeds. The car chargers will conveniently sport an illuminated USB port, which makes life easier to plug in USB cables in the evening or at night. While it might not be as cool as the Star Wars Darth Vader USB Car Charger, it certainly gets the job done in double quick time. The reVOLT and reVOLT dual will retail for $14.99 and $24.99, respectively.