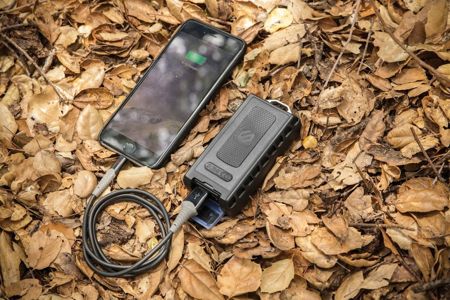 We are a people who simply cannot live without our mobile devices in this day and age, and so, it is no surprise to hear that there are different companies out there which are churning out portable batteries to keep our mobile devices nice and juiced up all the time, ready to meet any emergency need head on. Scosche seems to be a rather old hand at this particular niche market, having introduced its range of goBAT portable batteries before earlier this year. This time around, the Optimized for Outdoors range of products will gain a new member in the form of the goBAT 6000 Rugged Portable Backup Battery.

I suppose the goBAT 6000 Rugged Portable Backup Battery looks badass enough, so much so one might be forgiven into thinking that it is as indestructible as the Hulk’s hide. This portable battery pack has been specially designed to withstand and perform in the elements, especially since Scosche knows and understands the needs of active and adventurous consumers. Hence, the goBAT 6000 Rugged Portable Backup Battery is there to make sure that users will remain connected during hikes, camping, boat rides and other outdoor adventures.

The goBAT 6000 Rugged Portable Backup Battery will come with an IP68 waterproof/dustproof rating, which will enable it to take dunks, dives, drops and dirt, not to mention go under water for up to 3 meters. It has been built to withstand bumps and bruises, and the battery’s proven rugged construction lets it to meet or exceeds military drop test standards. There will be 6000mAh of power for you to use, letting it charge majority of the smartphones out there up to three times. Not only that, a Perfect Charge USB port that has up to 12W/2.4A of power will auto detect the fastest charge possible for any connected device. The asking price of $69.99 for the goBAT 6000 Rugged Portable Backup Battery is certainly not too much now, is it?