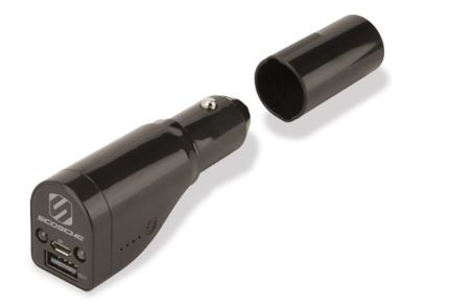 Scosche has a vast amount of experience when it comes to portable devices and accessories that help the road warrior remain connected and their gear all powered up, in the form of the GoBat collection. The latest GoBat device to be introduced would be the Scosche GoBat 2600, where it offers a whole lot more than just regular in-vehicle charging.

The GoBat 2600 is clearly not a one dimensional accessory, as this three-in-one device happens to be an in-car mobile device charger, with an emergency LED flashlight function all the while being able to stand in as a portable battery pack as and when required. Talk about being a true, blue multi-tasker!

Specially designed to travel with consumers regardless of where their daily lives take them, the GoBAT 2600 is able to live and perform in and out of a vehicle. This convenient and savvy purchase will see its built-in 2600mAh battery charge the likes of smartphones, tablets, cameras and other USB-powered devices without missing a beat, and do take note that as it charges itself in a car’s 12V port, it is also able to juice up a user’s device simultaneously. If you have an additional power bank, the GoBAT 2600 is able to be recharged thanks to the included microUSB cable. To know just how much juice the GoBAT 2600 has left, a blue LED power level indicator will do the job.

If you are in an emergency situation that requires a torch, then the GoBAT 2600 would fit the bill perfectly. It does not matter if you want to change a tire or walk through a trail in the middle of the night, the GoBAT 2600’s built-in emergency LED flashlight with safety strobe will be able to illuminate dark paths and alert others to your presence when there is very little or no light around. Since it arrives pre-charged, you can use the $24.99 GoBAT 2600 right out of the box.